Naxos, the largest and most fertile island in Cyclades, is probably one of the most attractive and beautiful of the Greek Islands. It combines golden sands with the mountain beauty. Large enough to be explored, Naxos promises you unforgettable holidays.

The best golden beaches are in the south west part of the island. The south west coast is almost one long sandy beach. The northern part of the island is green verdant and mountainous. The central part of the island -around Chalki village- is planted with olive groves. In Naxos Town the "Portara" ruins of an ancient temple, the ancient Kouros statues in Melanes and Apollon (the largest in Greece - 7 century BC), the Venetian castle in Naxos Town, small white chapels and churches, monasteries, are all an experience not to be missed. There are about 500 churches and plenty of Medieval and Venetian castles to visit. In Kalamitsia (in the area of Melanes) is the tower resort of the Jesuit monks (built at the end of the 17th century). At Danakos is the 12th century Monastery of Photodotis Christ which it was built by Empress Irene. In Moni, the church of Panagia (Our Lady) Drosiani with beautiful fresco of Panagia Nikopios.

Apollon via Galini and Abraam
It is a very pretty route with nice scenery. Galini is a nice village in a fertile valley. From Galini, a road leads to the Monastery of Ypsilis, once converted into a castle / church. Beyond the villages Galini and Engares (8Km), on the left, a lovely valley runs down to a large, shingly beach foreshore with bamboo bestrewn, shrub growing backshore. The route advances past the Monastery of Faneromeni (14Km) on the left. Hillia Vryssi (16Km) - Here is a steep valley with a bay at the bottom and offshore an islet. A few small terraced vineyards adorn the slopes. A little further on the steep, rough track leads down to a lovely small cove. Abram Beach (20Km) - On the left is a small chapel overlooking the pebble beach, with sandy backshore. 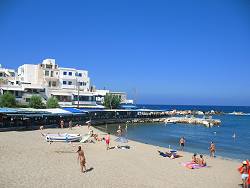 Hillia Vryssi (16Km) - Here is a steep valley with a bay at the bottom and offshore an islet. A few small terraced vineyards adorn the slopes. A little further on the steep, rough track leads down to a lovely small cove.

Abram Beach (20Km) - On the left is a small chapel overlooking the pebble beach, with sandy backshore.

Apollon, the final destination, is a picturesque sea-side village, where you can swim, relax and have lunch.

Apollon via Galanado, Halki, Filoti and Apiranthos
The scenery commences after about 8Km from Naxos Town, close by the 8th century Agios Mamas Church. This is a down path to the left and was once the Cathedral of Naxos possesing some remarkeble 7th century icons.

Sagri - Kato Sagri posseses the remains of a Venetian castle whilts Ano Sagri boasts the Monastery of Agios Eleftherios. The latter became Krifo Scholio -a secret school for Greek children during the Turkish occupation- and now houses a Folk Museum. There is also an archaeological site and beyond still on the main Halki road, the 16th century Monastery of Timios Stavros as well as the 15th century Church of Kaloritsa with a number of frescoes.

Detour - to Ayiassos Bay. Prior to Monastery of Timios Stavros a road leads to the bay of Ayiassos, with Panagia Yialous in the centre of the beach. Pyrgaki 5Km from Ayiassos, but the track is rough.

Halki (16Km) - is a pretty village at a high altitude, set down on great plain of olive trees. There are a number of fortified tower houses, including the remarkable Pirgos of Frangopoulou. 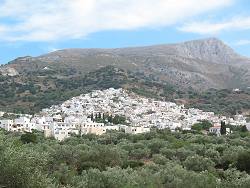 Filoti is a beautiful village situated on the flank of Mountain Zas.At about 22 Km from Naxos Town the road advances to Danakos village, famous for the Byzantine sculptures at the Monastery of Fotodoti which is above the village to the north.

Apiranthos (27Km) is one of the prettiest villages in Naxos and supposed to have originally been settled by Cretans.

Detour - to Moutsouna (12Km - 39Km from Naxos Town). Is the coastal village of Apiranthos and was was the quarrying of emery. The stone was bucketed down in aerial-cable ways from the workings, ridding the surrounding mountainsides. Apart of that it is a quiet village with sandy beach, tavernas, mini markets and accommodation. From Moutsouna, a detour on detour leads to Psili Ammos (47 Km from Naxos Town), a spread-out agricultural backyard and a long sand backed beach. A rough track leads to the lovely small cove and beach of Panormos.

Back on the main route again, Koronos (36Km) is the next village. It is a stepped village scrabling up the mountain sides and renowed for its emery mines. A turning off to the right, 0.5Km prior to Koronos, proceeds east to the Church of Panagia Argokiliotissa which on Easter Friday, plays host to horders of worships.

Detour - to Lionas (44Km from Naxos Town). The scenery approaching the village is excellent and the beach at the bottom of the bay is made up of large pebbles.

Returning to Koronos, the main route proceeds to the village of Skado and Koronida (Komiaki) (43Km from Naxos Town). The village is built at the highest altitude (700m) and is renowned -as well as all surrounding villages- for its wine. The views are splendit and the surrounding countryside is particularly lush and lovely, the road being shaded by bowers of trees and cleft by mountain streams.

Prior to the village of Vivlos, there are sign posts to the right towards Plaka Beach (Plaka beach can be easily accessed via Agia Anna). On the way to Vivlos, on the right, are the remains of a medieval tower and the Church of Agios Mattheos build on earlier Christian ruins. From Vivlos after some Kilometres is a signpost to Mikri Vigla.

Detour - to Mikri Vigla (19Km - from Naxos Town). A 4 Km (2 Km non-asphalt) road proceeds to a T-junction. The right part leads to a beautiful beach exposed to the North Winds (in other words, ideal for wind surfing), while the left road leads to a the begining of a magnificent, huge, coarse sand sea shore that sweeps all the way past Kastraki as far Alyko.This fine white sand beach is fantastic, well protected from the north winds and for those who wish to spend their lunch time here, there is a taverna.

Back to the main road route, there is a signpost to Alyko (19Km) from Naxos Town. The road edges the coastline which is broken up by three coves.

Pyrgaki (21 Km from Naxos Town) has excellent beaches and on the left of the road there is a sign post to Ayiassos Bay (5 Km from Ryrgaki). The track is rough but the bay is nice made up of golden sand.

Explore Naxos Island in comfort and safety      with CARnet